Top of My Field

My qualifications, history, professional experience, IT knowledge and skills.

As a teenager I programmed Z80 assembly on a ZX Spectrum, creating three games, one of which was published and is still available to play on the internet today (link). I went to College, taking Computer Studies, then on to University for a Software Engineering degree. 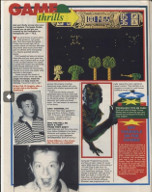 After leaving University I worked in the broadcast sector for 10 years developing desktop and server-side applications for television studios around the globe, working on projects used by the BBC, SVT, Turner, Nickelodeon and more besides, implementing features in technologies such as Teletext, subtitles, set-top boxes, voice recognition, video ingestion, and providing applications to support organisation's content management and workflow.

Following a short break to raise a family I became a freelance developer 2006 and haven't looked back since. I still work on projects in the broadcast sector, helping to build professional audio equipment for Linux based systems, designing and building embedded web applications to control them, but also outside of the sector building bespoke websites for agencies and independent business clients, occasionally working as the technical lead on projects and managing outsourced developers, occasionally helping with architectural designing and maintenance of technical infrastructure.